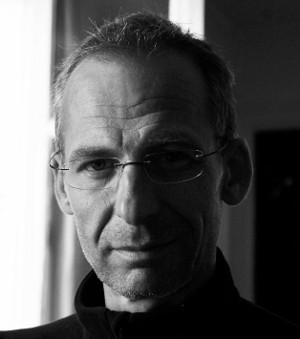 Beyond the symbolism of the tunnel, it is both the graphic and the esthetic effect which interest me in this theme. Whatever the subject is, the framework magnifies the light and sends it back to us, the viewer, blinding in its intensity. I like the contrast of the dark frame, steering the eye towards a brilliant and abstract opening, letting the imagination rush in and on out of the picture space. The idea of passage and transition are inevitably expressed here.

Pierre Riollet was born on April 25th, 1963 and graduated from the Auguste Renoir School of Art, Paris in 1983. After 20 years spent in Advertising, first as a Graphic Artist and finally as an Artistic Director, he decided to dedicate himself exclusively to painting in 2003. The artwork of the illustrator, Norman Rockwell, led him take an interest in the American Realist Movement. The artists, Edward Hopper and in particular, Robert Cottingham, influenced him at this time. Following a trip to the United States in 1987, he began a body of large scale works, featuring American facades and their projected shadows. Two years later, in 1989, he presented these paintings in his first one man exhibition. Parallel to his facade paintings, he worked on other subjects, still lives and landscapes, with various techniques (watercolor, ink-wash and drawings) and published a book illustrating a favourite fetish of his: "flipflops"! This exhibition presents a retrospective of recent and past works dealing with "townscapes", in oil and in acrylic. This subject matter has been dear to him for almost two decades now. Having worked at length on "facades", he now embraces "contre jour" always seduced by the light and the deep contrasts. This is the vital essence of his artistic research today.